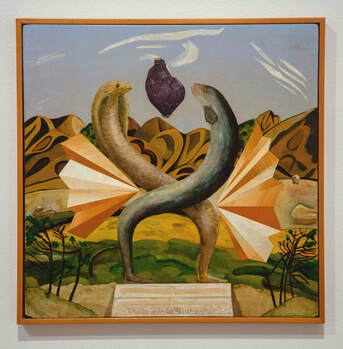 Molly Morpeth Canaday Trust Major Award $10,000
John Brown
Hastings
The Battle for Tuber
I always pull off the highway to look at historical markers, however unlikely or obscure. I’m drawn magnetically by the promise of events of great moment and the superstitious notion of being there, right on the spot where it happened. The result is usually disappointing, because most of the time, a monument says more about what people want to believe than what really happened. And these days the monuments of our pasts, and especially those of the colonial era, are subject to challenge; something to be amended, corrected or simply torn down in belated shame. I see all of that - the desire, the illusion, the imperative for truth - embedded in this drily mystical painting. History doubles itself, as both tragedy and farce, in this proposed monument to a crackpot theory regarding the arrival of the sweet potato in Aotearoa/New Zealand.
Dr Christopher McAuliffe - Guest Judge. 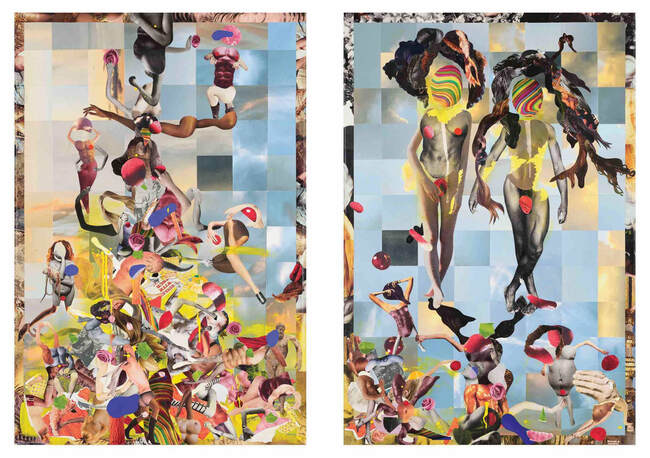 Akel Schulte Runner-up Award $4,000
Teresa HR Lane
Auckland
Raising of the Brazen Snake 1 & 2 (Diptych)
Buried in the centre of one panel of this work is its starting point - a worshipper raising his arms in praise of an idol, the coiled, brazen serpent of Exodus. From there, the two elements - flailing arms and entangled serpentine forms - spiral out across both panels. Discovered in photographs and magazines, these repeated forms become a grotesque typology - an encyclopaedia of lunging limbs, contorted bodies, idols and demons. It’s both hypnotic and terrifying, like watching a train crash, as the saying goes. Because it is a wreck, if we follow the inspiration back to its biblical origin. A people, impatient for the promised land, pursue the promise of a false idol. There’ll be a wake-up call soon enough, but will anyone in this orgiastic labyrinth hear it? Not likely.
Dr Christopher McAuliffe - Guest Judge. 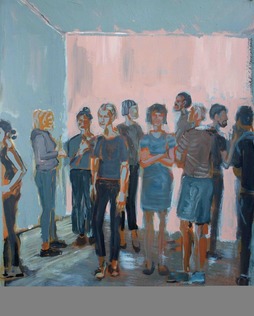 Craigs Investment Partners Youth Award $2,500
Danae Ripley
Auckland
Nice folk and pleasantries
There are few things so terrifying as being in a room full of people. Nice Folk and Pleasantries seems to me a painting of a crowd of terrified scenesters, all of them performing their way out of their anxiety. Sharp clothing, stylish hair and those shoes have got to be expensive. But look at the body language: mute, defensive and desperate efforts to avoid anyone’s gaze. I get the impression that nothing will liven up this party; not spiking the punch, not even playing Chic. If misery loves company, there’s no one alone at this affair. In the age of digital sociability, the life has gone out of real parties.
Dr Christopher McAuliffe - Guest Judge. 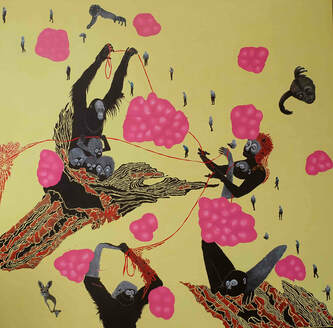 Arts Whakatāne Highly Commended Award $1,000
Lee-Anne Sheather
Whakatāne
Seeking connections
Paintings have a strange kind of space. They’re just square centimetres of canvas, but somehow they open onto something more expansive. I don’t mean physical depth. The effect has more to do with the way figures are arrayed across the surfaces, how their disjunctive scales give them different values, and how the spaces between them become so loaded. Animals loom large, and look at the viewer. Humans are distant, hooded and withdrawn. Side-by-side on the painting’s surface, humans and animals are yet disconnected. Regardless of its title, Seeking connections seems to me about the disregard humans have for animals.
Dr Christopher McAuliffe - Guest Judge. 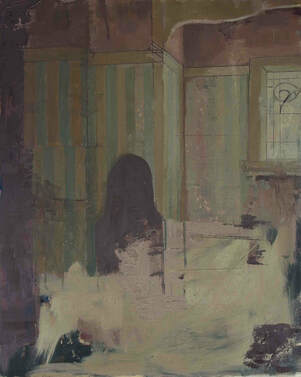 Merit Award $500
Team Scott and Maureen Trinity Real Estate
Esther Deans
Auckland
With and without
Painting seems to work best when it doesn’t spell things out. Glimpses, shadows and spectral blurs have more to offer than sharp-focused, high-definition detail. All the same, an artist has to go about the job of painting those evocative apparitions. Things can go bump in the night, but how does that happen in a painting? With and without has to do the job of a good ghost story, delivering enough of the real to make the uncanny manifest. A narrow tonal range and thinned washes make for a fuzzy unreality, rather than horror movie shadows. Orderly lines in depth give way to an ectoplasmic scumbling of paint in the foreground. And then there’s what you don’t do; it’s the emptiness of the scene that makes this painting so eerie.
Dr Christopher McAuliffe - Guest Judge 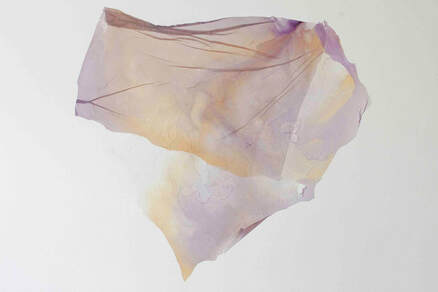 Merit Award $500
4 Art Sake Gallery
Raewyn Martyn
Wellington
Surfactant (1)
‘Less is more,’ went the old modernist adage. How does stripping away the traditional material elements of a painting - the stretcher, the canvas, the frame, the hanging wire - make for more painting, not less? If all that is left is the paint, there’s more to be learned, and seen, about its physical character. Paint can be seen as a kind of skin. First it takes shape by virtue of viscosity and surface tension, then it dries into a manipulable film by virtue of breaking or forging molecular bonds. Gripping the wall, a thin film of dried emulsion is paint present as paint, with none of the carpentry and upholstery of the traditional easel painting propping it up.
Dr Christopher McAuliffe - Guest Judge

Artist Statement - Once dry, plant-based biopolymer paint can be peeled up, rehydrated, recomposed—primed to self-adhere to a fresh wall. This painting holds onto plasticity, takes breath from material process, and is installed intuitively with each new adhesion. It exists at each moment of composition: surface, liquid, material, and in-between. This painting stirs with surreal rhythm—a material poetry.
Biopolymer skins behave like biofilms—anthropogenic or otherwise— adhering to surfaces; pebbles in a riverbed, arterial walls, cave walls, abattoir floors, and our teeth. Within these coatings, surface active agents (surfactants), alter interfacial and surface tension, influencing initial aggregation, pigmentation, and future changes in the way liquid, gas, and solids move between boundaries. 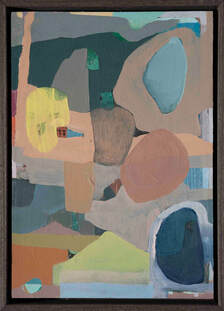 Merit Award $500
Browne School of Art
Adrienne Millwood
Lower Hutt
Tomorrow Today
I’ve spent enough time looking over artists’ shoulders in studios to know that paintings are built not painted. And this one is very smartly-crafted. Calm pools of paint, drifting vertically and horizontally, make for a subtle undercurrent of energy in what looks, at first glance, to be a very calm work. Embedded in the surface are signs of great attention to detail. Paint is thinned, blotted and rubbed in; textures are built up so that they can be effective when painted over; contour is marked with a brush loaded and twisted just so. Making a painting is one thing after another. Looking at a painting is all of those things happening at once. Try to imagine doing the first, all the while seeing the second.
Dr Christopher McAuliffe - Guest Judge 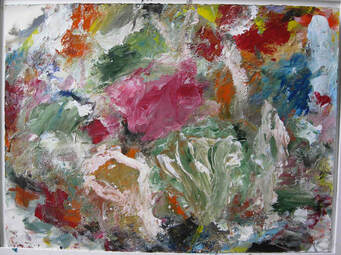 Merit Award $500
Frames by Daniel
Kirsten Ferguson
Dunedin
Garden
I’m very happy to find that a sticky, squishy painting like this is titled Garden. We tend to forget how physical and material gardens are; not wafting blooms and ethereal aromas, but roots, soil, roaming tendrils and enfolding leaves. The same goes for painting. Too often we rush right past the paint in search of what it’s picturing. The illusion, which isn’t really there, seems more important than the paint, which is. The trick is to let the paint serve the illusion without ever concealing its own presence. Flares of colour will do as swags of flowers, and furrowed paths of the paint brush will pass for curling leaves. Remember to smell the paint before your stop to smell the roses.
Dr Christopher McAuliffe - Guest Judge. 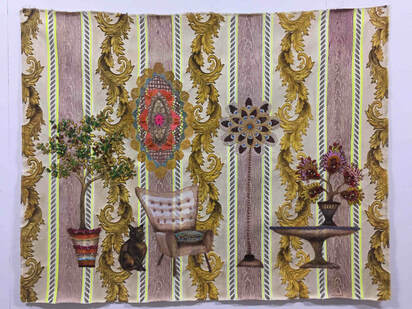 Merit Award $500
Gordon Harris Ltd
Nicola McCafferty
Wellington
Vintage scene with cat
Modern abstraction was always haunted by the spectre of decoration. What if someone were to mistake an abstract painting for wallpaper? But there’s always been a kind of artist who wanted to stare down that fear by piling on pattern, filigree and glitter until the painting groaned under the weight of its own anxieties. Vintage scene with cat is a celebration and an exorcism at the same time. Vintage it is, with that 50s wingback chair and jazz age beading. But more than that, it harks back to the Rococo art of the 18th century, when sensuality was unleashed, and luscious decoration stopped just short of the grotesque.
Dr Christopher McAuliffe -Guest Judge. 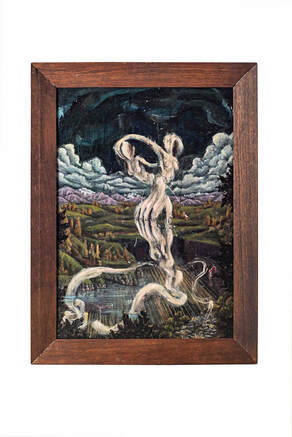 Merit Award $500
Whakatāne Society of Arts and Craft & Hon. Anne Tolley MP
Toby George King
Auckland
The concealment of death
When you have a distinctive vision, you can transport the viewer into another world before they’ve even had a chance to ask where they’re going. I get a little nervous when that happens, when an artist makes a real picture of a world I can’t see or don’t know. If I’m not sure where I am, is this a dream? Or some trauma dredged up from the artist’s psyche? Then I have to accept that I don’t have a handle on the world, which is a good thing, and what art should do.
Dr Christopher McAuliffe - Guest Judge 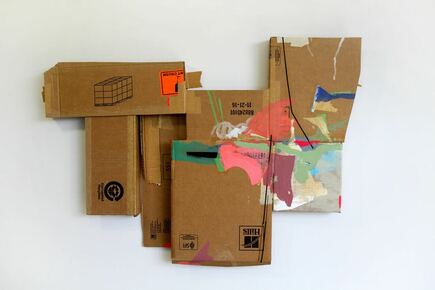 Merit Award $500
Crew Community Resources
Sena Park
Paihia
E-um #9
There are big modernist themes packed into this small painting: Dada’s found objects, the Cubists’ use of printed words, and the shaped canvas of 1960s abstraction. Modest and witty, E-um #9 continues the tradition of testing painting’s fundamental terms: shape, surface, mark and colour. I like the way that the flattened cardboard box comes with a little diagram of what a stack of boxes should look like (in perspective!). There’s the great conundrum of painting---three dimensions, appearing out of two---plotted neatly before our eyes.
Dr Christopher McAuliffe - Guest Judge

Local Artist Merit $500
Ross and Kay Boreham and Accounting Biz
Mary Duggan
Whakatāne
Fade
Sometimes it’s more useful to call an artist a picture-maker rather than a painter. Fade is like a diagram of a system known only to the artist. It’s not an explanatory diagram, because the system hasn’t been worked out yet. It’s as if making the painting is part of the working out. And that’s always a good sign - painting is a way of thinking, not a way of pinning things down. Fade is full of compelling figures of containment, repression and resistance. This makes for very striking spaces, more conceptual and psychological than physical. There’s a struggle going on here, and signs of the vulnerability and strength that come with it.
Dr Christopher McAuliffe - Guest Judge