1986 - The award began as the Shell Art Award in 1986 instigated by Jacqui Hughes and Lynne Dawson of the Whakatāne District Community Arts Council (Arts Whakatāne). It then became the cornerstone event of a multi-disciplined annual Summer Arts Festival for Whakatāne. 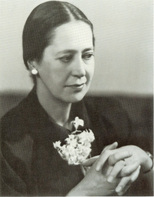 Molly Morpeth was born in Wellington in 1903. In her early years she studied art at the Wellington Technical School.
In 1928 Molly met Frank Canaday on a trip across the Tasman Sea aboard the S.S. Ulimaroa. Molly was coming back to New Zealand with her parents and Frank was on a business trip around the world. They saw each other only for a brief period and after lengthy correspondence, they were married in Toledo Ohio in 1932.

On the art scene at that time 'modern art' was beginning to emerge in America, coinciding with the opening of Museum of Modern Art in New York. Molly saw American expressionism in art developing, particularly through the works of Piet Mondrian and his move from realism to abstraction. Her paintings of this period can be clearly seen as being influenced by this new 'abstract' approach to painting. There was a lot of art discussion in the art communities at the time and Frank Canaday, in his book, referred to this discussion as 'futile attempts to disentangle art definitions'. He was referring to the art critic E.A. Jewel who wrote about the new abstract expressionism...

“There can be no doubt, I think, that the general public is prone to accept art that is completely or relatively 'naturalistic', and reject - or, at least, to be extremely wary of - art that completely, or in large measure departs from such procedure.”

Molly was passionate about painting and in the 1960's showed her maturity as an artist when her works became confident, colourful; totally embracing expressionism. Her life drawings need not be overlooked either. They are exquisite loose renderings, as portrayed in the book about her work 'Triumph in Colour'
A number of New Zealand galleries have displayed works of Molly Morpeth Canaday, and many are owned by the National Art Gallery.
According to the register of her completed works, at present there are over 300 held in private and public collections here and overseas.

Why Whakatāne? When Frank was setting up the trust after Molly's death in 1971, he worked in contact with solicitor Rex Morpeth, (Molly's cousin) on the wording that would cover Frank's wishes for the trust document. Rex lived in Whakatāne.