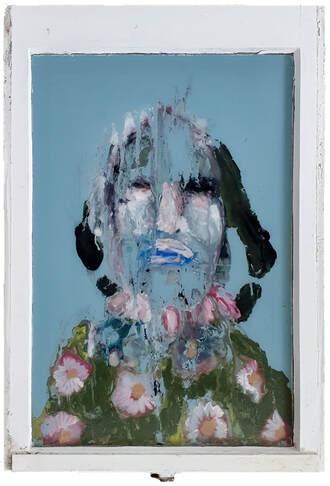 They laughed, I cried

This work was captivating from the outset. Some might think it grotesque or lacking the technical refinement to be the recipient of this major award, but it is the very urgency and emotion of the making and the evocative process of the viewing that makes this work so memorable. There is a clown-like quality to the layered application of paint, made more so by the white face and daisy motif, but this is not your happy-go-lucky entertainer; rather there is an intense, almost horror-like air in their haunting gaze. This dark-eyed figure seems contradicted by their flowery dress and bold jewellery choice, like a morose housebound captive looking desperately out into the world from their domestic prison, or alternatively, they might be looking into the home they wish they had through a rain-washed window pane. Either way there is nothing about this work that allows it to slip into the background. 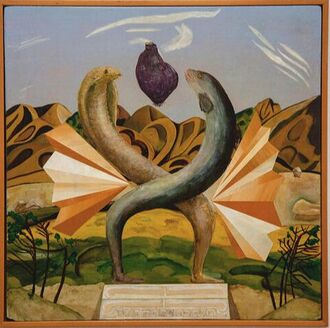 Hastings The Battle for Tuber

I always pull off the highway to look at historical markers, however unlikely or obscure.
I’m drawn magnetically by the promise of events of great moment and the superstitious notion of being there, right on the spot where it happened. The result is usually disappointing, because most of the time, a monument says more about what people want to believe than what really happened. And these days the monuments of our pasts, and especially those of the colonial era, are subject to challenge; something to be amended, corrected or simply torn down in belated shame. I see all of that - the desire, the illusion, the imperative for truth - embedded in this drily mystical painting. History doubles itself, as both tragedy and farce, in this proposed monument to a crackpot theory regarding the arrival of the sweet potato in Aotearoa/New Zealand. 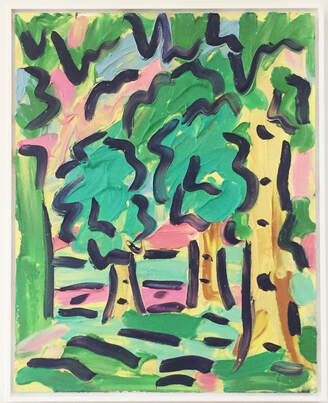 Through the Trees (Thirteen)


A feisty freshness pervades this painting, a welcome shot of visual adrenalin delivered directly through the eyeballs. Carlin's work can be appreciated on a number of levels : as a high-voltage re-imagining of the work-worn landscape genre; as a study in colour (those glowing greens and lustrous pinks jostling up against creamy neutrals); or as a technical exercise in construction, with spacial relationships vigorously amplified in black. That's all there, and ready to be enjoyed, but if I'm honest it's not why I selected it for this award. I chose it because of its sheer 'look at me' audacity, that playful bustling confidence which lands it on the right side of cheek. It's a cracker. 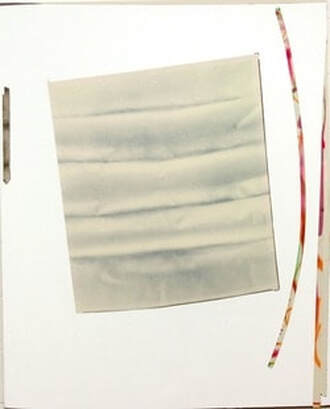 Lyndsay's Swipe or Tilt sits within a long tradition of Minimalist painting while choosing to serve it forth for our delectation. Instead of pursuing reductive spatial illusions, this painting lays them bare. Masking tape in painting customarily calls no attention to itself, but is instead applied to reduce the traces of the painters hand. In this case the shape and bleeding edges of tape are flagrantly revealed, exposing the flimsy foundation beneath. This serious painting is built on a substrate that resembles candy-cane. At the paintings edges are borders that repudiate the conceit of immaculate geometry. At it's centre, the artist places a trompe l'oeil device, taking final swipe or a tilt at minimalist painting's claims to optical coherence. 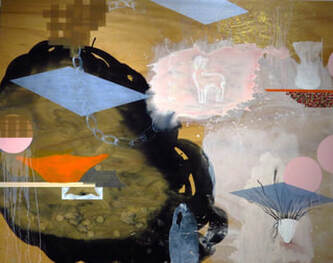 
Pinch of Salt by Frances Hansen seems to defy explanation. A curious encompassing of painterly languages build the sub-structure of a composition littered by disparate signs and symbols.
Hard edged forms are drawn against soft, warmth against coolness, action and movement against stillness. Detail impresses on us her intent, a need to communicate, to read and follow the visual clues. But we are lost. In a picture plane of riches we must settle for a Pinch of Salt.

Peter Miller's oil painting Fun Ho! places a familiar New Zealand icon centre stage. It is a skillfully painted work on a well-constructed stretcher utilising cotton canvas of an appropriate weight. The vintage toy truck is thoughtfully positioned within the composition to activate the background space. It is nostalgic without being sentimental. An elongated shadow extending from the rear of the truck anchors the wheels to the ground plane, 'slows' down the viewing of the painting and could be read as a metaphoric reference to the passing of time. 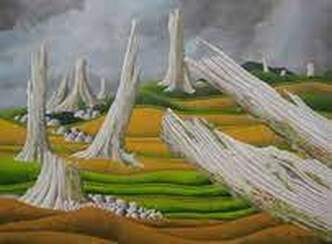 
Reminiscent of Christopher Nevinson (1889 - 1946), a war artist who depicted the shattered trees of No-Mans Land during World War 1. The Artist has depicted a starkness revealing the depredation of a forest and the bleakness of a landscape as a consequence. The work has been well assessed and treated in a way in which the direction of the fallen trees present a subtle pyramidal structure to the composition. 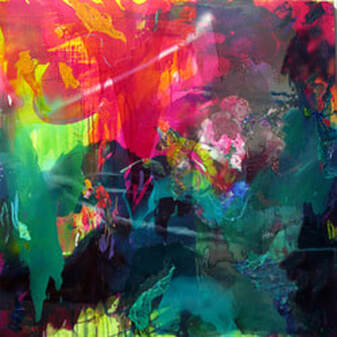 
Fairy has a very dense field which is expressive and colourful. It also exhibits verycontrolled surface tensions amongst it’s multi-layered surfaces - which suggests the artist has not thrown paint on the canvas, but has contemplated the work before the act of painting. This exuberant and joyful painting has a basis in the tradition of cold and warm colour oppositions in paint and belongs to the genre of “abstract” paint histories - the viewer can read their own narratives and stories as they view and interact with the work. 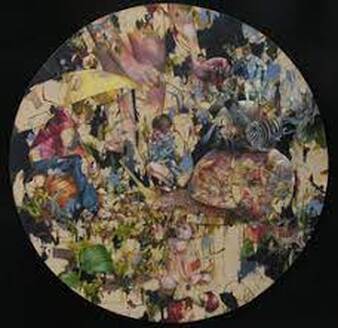 This is a complex work interfacing painting and drawing. It is a work by a very
accomplished painter who uses the basis of traditional painting to support her stylistic experimentations and personal approaches to her art. This work is full of symbolic meanings and the viewer can get lost within the narratives, as well as formulating new stories and return viewing. The tondo (round) shape may also suggest that there is no beginning and no ending and life is a recurring thematic happening experienced by all people. 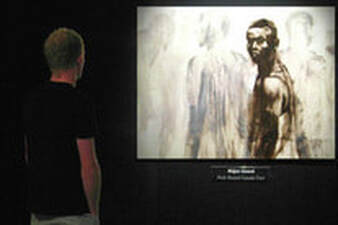 'This work combines the language of painting and drawing into a single highly effective statement. There is just a enough visual information and detail provided, which considered with the title, 'Amongst Stranger', allows the viewer to engage with the work and begin to speculate on a possible narrative which this individual image might well be part of. The work is a model of expressive force achieved with confident handling of a medium and pared down colour range.' 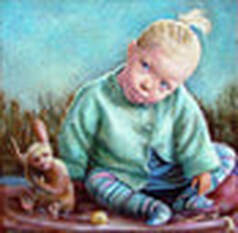 Mr Fahey said depite the paintings diminutive size (the smallest in the exhibition), he kept coming back to it as it "slowly unravelled it's charms". "It's a special little work" he said. "It is so easy to sentimentalise a young girls innocence and it can often boarder in cliche territory but this doesn't, it resists it.  Small works can be very powerful and this really works as a small scale work - all it's intensity is compressed - Beacon January 2009 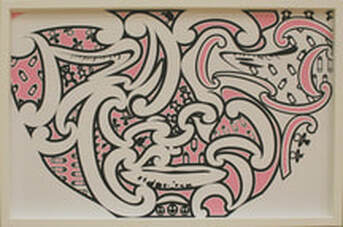 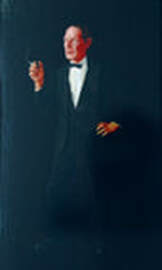 Judge Jonathan Mane-Wheoki said Mr Freemantle's work was "visually arresting and intriguing." The style reminded him of works by Dutch masters of the 17th century who were students of Rembrandt. He said it was very technically accomplished with microscopic brushwork. - Beacon January 2007

The Dynamism of Revenge

Something for your mind, body and soul